In this era of various purchasing panics clearing the shelves, and the internet, of all sorts of affordable ammunition, perhaps it is time to consider an air rifle for both basic marksmanship practice or for acquainting teens and new adult shooters with safe gun handling.

First, let’s simplify the bewildering amount of choices there are among “serious” adult sized air rifles. You may be shocked to discover that you can easily spend more on a modern air rifle than you would on many basic center fire rifles from Remington, Savage, Ruger, and the like. Unless you are into Olympic level target shooting, or into trying to hunt small game with projectiles heavier than the .22 pellet, you should perhaps first consider a single shot spring piston air rifle.

My choice for entry into the world of modern air rifles might also prove to be yours— the spring piston operated RWS 34 in .22 caliber. These rifles are made in Germany and distributed and serviced by Umarex here in the US. RWS has been making air rifles for decades now and the experience and craftsmanship shines through in this affordable air rifle, that with care, should last you a lifetime.

View it on Amazon.com

If, when you hear the words “air rifle” your mind’s eye leads you to the Daisy Red Ryder from The Christmas Story, or to memories like mine, where you excessively pumped a beginner’s variable pressure model only to get mediocre velocity, you will be shocked by the quality and the performance of the RWS 34.

When you first take hold of the RWS 34 you instantly know that you are not holding a toy. The rifle barrel, and air reservoir that makes up the bulk of where the receiver of a gunpowder rifle would be, are both made from blued carbon steel. The rifle features a handsomely stained Monte Carlo style beech hardwood stock. A great detail of the shaping of the RWS 34’s stock is that the cheek rest for a right handed shooter is not so pronounced as to interfere with the cheek weld for a left handed shooter. This ambidextrous thoughtfulness carries through to rest of the design as well.

The pistol grip area of the stock has no bias toward either hand and is left uncheckered so that you decide where the grip is most comfortable, not where the designers felt it is. Additionally, the safety, just as on nearly every bolt action rifle ever produced, is on the tang of the receiver, where it falls to the hand for any shooter. Featuring a simple and positive, pull for safe, push to fire manual of arms, the safety lever is large enough that you can operate it even while wearing gloves.

The RWS 34 uses a classic break barrel spring piston air charging system. The system is hinged just about at the end of the stock’s forearm. By pulling down on the barrel behind the front sight, which takes between 30-33 pounds of force, you drive a spring assisted piston to compress air stored within the reservoir. While the action is open, you simply place a .22 caliber lead pellet into the chamber and then close the action. 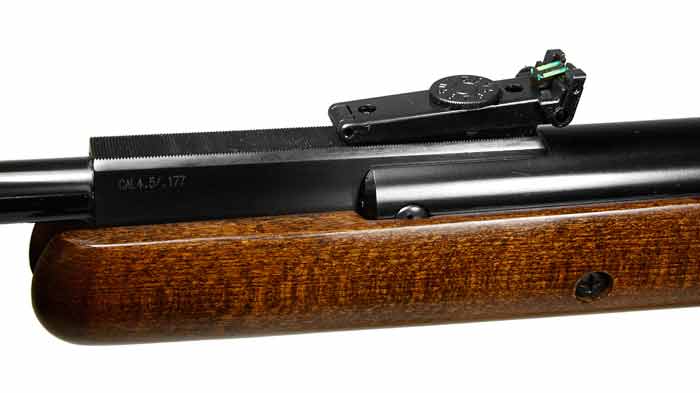 If the rifle is on safe, you push the safety lever into the firing position and you are ready to shoot. The RWS 34 sports a two stage trigger that is end user adjustable with a Phillips headed action screw that is visible behind the trigger when the rifle is upside down. Ideally, you want to have a bit of pre-travel in the trigger, leading up to a predictable and consistent “second stage” stack-then-break that fires the rifle, followed by minimal trigger over travel. The RWS 34’s adjustment screw allows you to find your own sweet spot.

Frankly, if your rifle cannot score hits it doesn’t matter how rugged or well made it is. One of the general knocks on break barrel air rifles, as opposed to fixed barrel air rifles, is that the barrel is being hand cocked, and thus moved, thousands of times over its service life.

That is not a concern on the RWS 34. It is a carefully manufactured product. Go ahead and cock one when you get the chance. There will be no appreciable play in the action, whether you do it just once, or a hundred times. This rifle has long been sorted out. With its precision machined rifled barrel, and fully adjustable, contrast colored, fiber optic front and rear sites, you will be able to hold tight groups even at fifty to sixty yards.

Like a “real gun” you have to discover which hold works best between you and the rifle, and you also have to sort out which brand of pellet best works in the rifle. As in a rimfire or center fire rifle, the details on the ammunition matter. As pellets are lead castings, consistent weight, cleaning off flashing left over from casting, and aerodynamic shape differences can all effect your ultimate accuracy.

Check Out The Best Price For RWS 34. Available now on Amazon 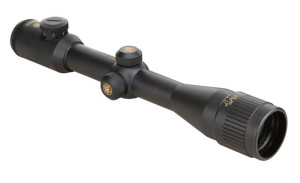 The RWS 34 also comes with the RWS 300 4×32 adjustable objective scope with a duplex reticle. Everything necessary to mount the scope to the rifle is also included. Though it will not be capable of a true “co-witness” setup due to the ring and base height, the scope will focus between 50 feet and infinity, and is capable of wringing out 1/4 MOA results within the effective ballistic range of the rifle—if you can do your part.

The RWS 34 also comes with a limited lifetime warranty for the original owner, with wear items such as mainsprings and seals not warranted after 18 months. Never leave the rifle charged longer than necessary.

Whether you are ready to move up from a youth BB gun, or looking for a rugged .22 caliber air rifle to seriously practice your shooting technique with, the RWS 34 could be the only air rifle you will ever need to buy.